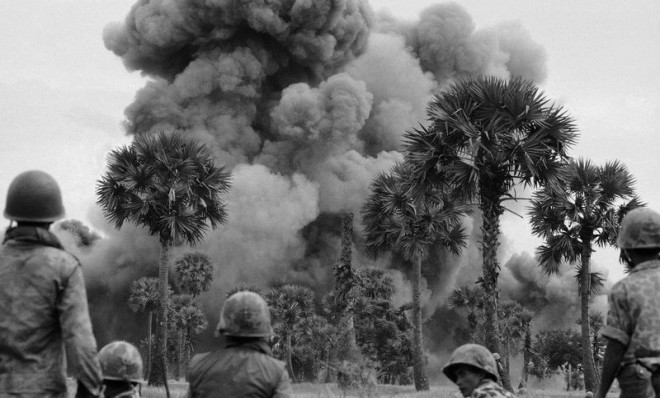 My journey started 4,973 km north of where I currently live.

In 1984 my family and I fled a terrible civil war in Cambodia, which decimated the population, terribly cutting short the lives of two million people. Most of my own extended family never made it out of Cambodia or never made it.

My parents, and my younger sister arrived on the shores of Perth, WA as refugees. My mother and father came to Australia literally with nothing but the clothes on their backs  and the heaviest things they carried were their dreams…

Have you ever had a dream?

The dreams my parents had were not for themselves it was simply that their children would have a life that they could only imagine. And by doing so it would somehow make the sacrifices of many others worth while.

I grew up having three main ideas etched into my brain:

These ‘mottos’ served me well. I left high school with a talent for Art and a passion for helping kids learn about it. I went to study to become a high school Art teacher!

I married young and I became a father at the age of 20 (to the general horror of everyone concerned.) I learnt a lot of lessons, I made some stupid mistakes and I was given some immense gifts (Two in particular). Of all the stupid things I have ever done, having two amazing daughters was not one of them however. And it helped me grow up… mostly!

I learnt how to live on noodles and pasta as a student. I learnt that you never truly appreciate your parents until you become one. I learnt that my years of sleeping in were officially over. And I learnt to power of forgiveness.

By the time I was 28 I had two young kids, I was earning my stripes as a high school Arts teacher in a sleepy rural town in South Australia. We were also slipping greater and greater into debt and with the financial problems and a host of other factors, our marriage was on the rocks.

If you were with me 6 years ago you’d find yourself in small 2 bedroom house in a quiet Cul de Sac 30mins out of Perth. Outside our doorstep was a small park and playground where I would take my daughters to play after school. You would often find me there watching my kids run around in the sand or pushing them in the swings.

Inside the house you’d be forgiven to think I was a minimalist hippy.

Most of the house was bare, we all slept on mattresses on the floor, and the furniture didn’t match because we picked it up from the side of the road…

Pictures that we all painted and drew livened up the place.

We had just moved across the countryside from South Australia to be closer to my family after the breakup of my first marriage which left me a single father, and a bankrupt one at that.

A bankrupt, broke, depressed single father of two coming back to his family with his tail between his legs…

Nevertheless with their love and patience I slowly got back on track.

And I got back to my profession – teaching high school kids English and Art.

Outside I was cheerful and positive artist and teacher. But what you couldn’t see was that inside I felt duped.

I was still angry with myself and with how my life had turned out.

I blamed everyone else but myself.

I thought I had done ‘everything right’.

I had two university degrees, I studied hard and had put my head down and bum up for many years.

I felt like this whole promise of a secure career in Teaching was a lie because each year that I was working I was less and less secure.

I had met so many other teachers who couldn’t get permanency, bouncing from one contract to another who were unable to get loans, to buy houses because they were ‘contract teachers’.

Anyways, obviously, the way I felt couldn’t continue, it wasn’t healthy for me or my kids.

So I started pouring myself into personal development like it was going out of fashion! I went through all the classics – Think and Grow Rich, As a man thinketh, The strangest secret etc

I was a sight to behold, power walking through my neighborhood early in the mornings – shouting ‘I think I can! I think I can! Every day in every way I’m getting stronger and stronger!’ (From a bootlegged copy of Personal Power II)

But a weirdo on a mission!

Our neighbors moved out soon after… (coincidence?)

Along the way I somehow met an amazing German master florist (via online dating!) who would give me the honor of being my wife and we would have our youngest daughter 3 years later.

With a growing family I supplemented our income with extra jobs. At one point I was working a full time job, I was running arts workshops on a weekly basis and also training to become a personal trainer.

It wasn’t uncommon to see me running 70-80 hour weeks! Unfortunately in order to keep our heads above water I was drowning with all the commitments to work and seeing less and less of my family.

I realized I needed a way out of the 9-5, I no longer wanted my income to be chained to my time and I didn’t want to be told what to do and when to do it and who to say please to.

I wanted a way out,

and I wanted something that would give me leverage and time freedom.

So it wasn’t long before I found internet marketing and making money online. I started to dream again that I could finally provide a good life for my family and be able to spend more time with them.

It was nothing but.

For the next four years I struggled online.

I spent thousands of dollars in different programs and buying course after course and lots of push button software.

I suffered long periods of shiny object-itis, information overload and procrastination.
To overcome my feelings of overwhelm I spent money like a drunken soldier digging my family into further credit card debt…

If there was some hair brained scheme on the internet guaranteed to lose me money I made sure I had my name on it!

At some point I had to stop and take a breather.

At this point someone wise asked me, ‘Whats your Why Samith?’

Well I said ‘Well, to make money of course!’

And then they gently asked again, ‘No, what’s your REAL reason why?’

And I really dug in deep, and as I started talking about my why, tears started coming down my eyes and I started to cry.

Meet my family, the reason I do what I do…

I want to give my wife the life she richly deserves and allow her the freedom to just be a mum and look after our kids.

I want to give me girls the opportunity to travel and see the world with me and to have the best education and hobbies money can buy.

I want to retire my mum, so she can garden all day, look after her chickens and be my personal cook!

I want to help so many people out of their financial pains and allow them to have the same time and freedom of choice.

I want to create real change in the world and I believe the internet is the real frontier for that.

There’s a lot of misinformation and BS out there, keeping people frustrated and confused and spending more money.

This business is not as hard as every-one makes it out to be. Truly it can be quite simple.

But its not as easy either…