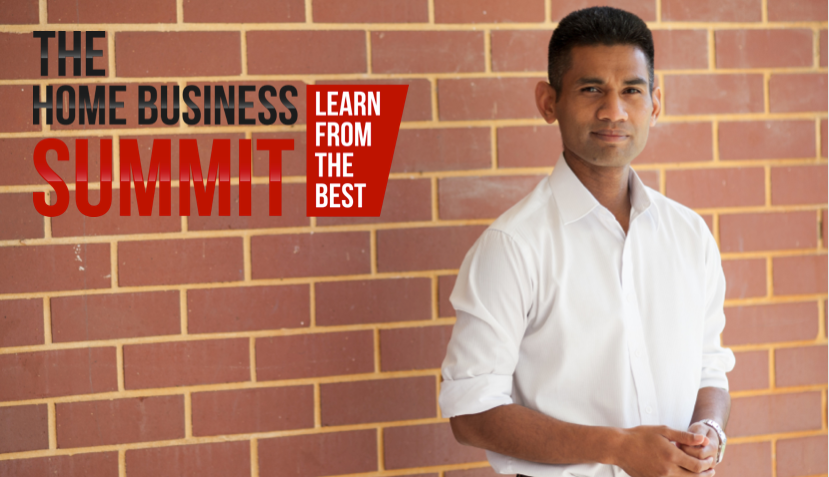 I week ago I attended the successful Melbourne Home Business Summit, an event hosted by my company MOBE. Having had a few days breather I’m only just now realizing how impactful it was for me as well as the attendees and guests who came. From Friday 22 August to Sunday 24th Augusts attendees were treated to one of the most intimate and affecting corralling of online home business owners in Melbourne (perhaps Australia). I was one a few prime speakers who spoke on success principles of elite online earners and it was a privilege to share the stage with the likes of Drew Innes, Jenni Jordan, Ernest Lim and Anthony Cortrell.

If you’d like to learn more about this business opportunity, join MTTB here today.

The week before the summit I operated on very little sleep as I went over my keynote slides and speech content. And no it wasn’t because I left it to the last minute! (Well, maybe a little bit…)

On average I survived on 6 hours of sleep or less for most of that week and on Thursday I kissed my love goodbye at the airport and boarded a Virgin domestic flight form Perth to Melbourne at  11.45pm.

Three things I wasn’t prepared for:

Plane food continues to grate at me and I eat it grudgingly. It’s very unlike me to be ungrateful of anything but there, I said it.

As I got off the plane in Tullamare airport in Melbourne the first wave of sleepiness made me quite dozy… until I went outside and I was hit by a cold slap in the face by Melbourne weather which quickly woke me up!

I didn’t bother to check into my hotel that morning but went straight for the Melborne Rendevous and texted Drew to meet me for early breakfast. (It was 6am by the time I was in Melbourne). Without skipping beat (well, maybe a few) Drew met me at the breakfast bar and over a continental breakfast we brainstormed the day ahead.

Now, what I’m going to share with needs to stay just between us ok?

What happens at the Home Business Summit stays at the Summit right??

When Drew and I looked at the numbers of the Home Business Summit we were instantly worried. They were less than 20.

Australia’s first Home Business Summit, Sydney was highly successful with over 100 attendees. This would have less than 1/5 of that…

But in a defining moment I said to Drew ‘You know what, we’re professionals. The show must go on.’

Chocking back a laugh, Drew looked back at me and looked at my serious face, and realized I wasn’t joking.

‘You’re right mate… we ARE professionals. The show must go on.’

That became our mantra. 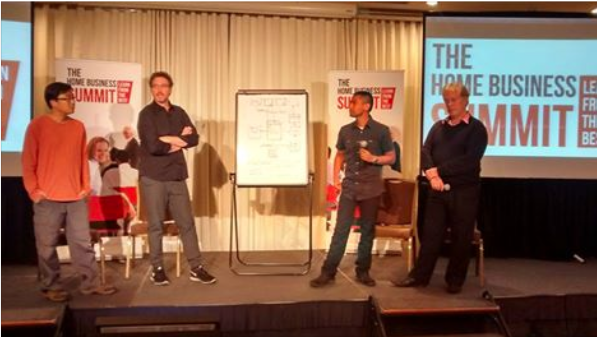 You see we realized the summit was never about us.

People had paid good money, they had taken time off from work, time they could spend with their loved ones or family to spend it with us because they expected to learn content, and strategies that would help their business move forward.

This event wasn’t about us and how good we were, it was about them.

We weren’t going to let them down.

And with that intention clear we got to work to make this Summit amazing.

Session 1: Getting Your Foundations In Place, with Drew Innes 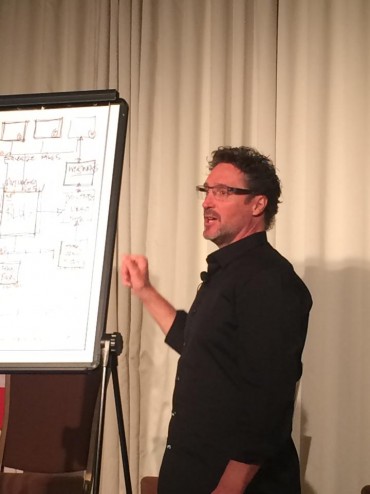 In the first 20 mins of the Summit we address the white elephant in the room. The numbers.

And Drew, Mr Mindset himself, helped everyone got clear about the opportunity at hand.

On one hand, there was no way we could replicate the energy and enthusiasm of a large event. It’s big, electric and infectious.

But what we had, was arguably as good.

We were going to tailor the content, on the fly, to address each and every attendee. They were going to get workshop style content that would have cost them much much more.

As this silver lining settled into everyone’s mind, over the weekend, it was clear that what we would factually produce was as an outcome – a more intimate, more intensive and much more personable Home Business Summit.

What was really interesting was that people actually had time to connect and talk with one another and real friendships and connections were made over that weekend.

It’s hard to replicate that in a bigger event, it’s easy to get lost in the crowd… 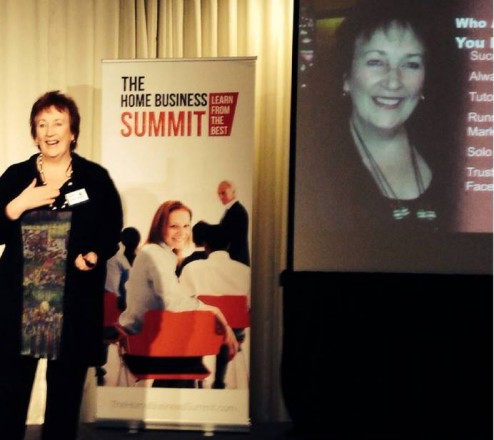 Jenny was one person I really wanted to meet, you’d think by the way we got along we’d have known each other for ages but this was the first tme we had met and it was worth meeting!

Jenny has an amazing story, it’s not an easy story for one to listen to but it’ inspiring when you consider what she’s been through and how she’s come out of it on the other end.

Jenny epitomizes for me the five principals of people who love to learn and who are successful:

1. They are always willing to invest in themselves
2. They are always open to new ideas and new ways of thinking
3. They take action on inspired thoughts
4. They make deciscions quickly
5. They give themselves permission to be greater everyday

I’m going to upload an interview I did with her in another post. If you’d like to learn more about Jenny you can go to her blog here.

I was very pleased to be included as a rising star at the Home Business Summit Melbourne, and to be of assistance with a lot of the back ground work. Speaking on stage helped me achieve one of my 5 months goals – speaking on stage and recording it.

My speech covered my story and the 7 Elements of Success of Elite Earners or my A to G of Success online as I liked to call it.

Overall, from the feedback I got people really connected with my story and got a lot of value out of it. Unfortunately because of a prior commitment to record another speaker’s speech my camera ran out of battery and it only recorded the first 20 mins!

I’ll upload the 20 min video for prosperity sake and I’m planning on creating a very special follow up post on that particular speech.

In the meantime you’re just going to have to take my word for it that it was awesome! lol

Oh by the way, I almost forgot to mention that I got to go on stage and accept a very big 6 figure cheque! How much for you ask? You’ll find out in a future post! (and if Australia Post ever send it to me…) 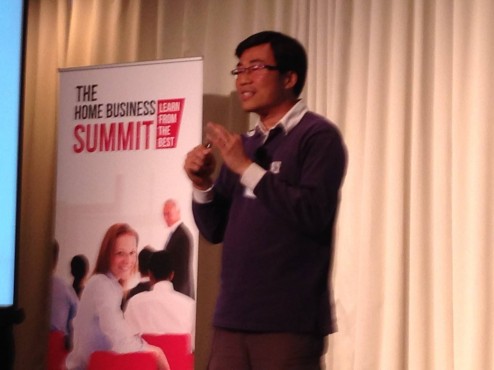 I had only met Ernest once before but meeting him again was like meeting a long lost brother. What I wasn’t expecting was Ernest’s story of going from an engineer and how simply the love of his kids made him overcome every online obstacle to make MOBE a success for him and his family. There was one other thing I wasn’t prepared for and that was how hysterically funny he was!

As Luke recounted his story of finally getting a check form Amazon for $500 something dollars AFTER TWO YEARS WORK many of us could sympathize on similar investments of time and money to get paltry affiliate commissions.

One analogy that Ernest used that I felt was really clever was about the story of a very well known engineer. This engineer was very smart, the best in his field, and had received numerous awards for this special engine he created.

But this engineer who was very smart, was working for a CEO who was no where as smart. While this award winning engineer was driving a Honda his boss, the CEO, was driving a Maserati! The moral of the story being that you don’t have to be the smartest to be successful you just have to surround yourself with people who are smarter than you!

I also had the honor of interviewing Ernest Lim as well and I will be uploading the video very soon.

If you’d like to learn more about Ernest just go here. 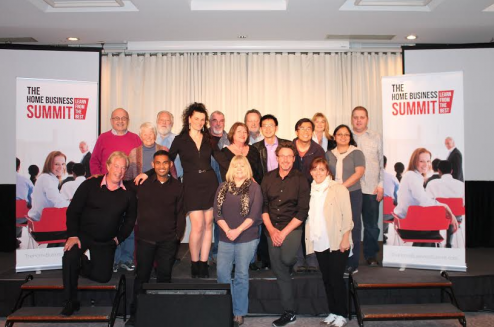 Matt knows how to create an exemplary event. In particular the hotel, the staff and the fine dining during and afterwards. I honestly haven’t eaten so much in a long time. To the detriment of my waistline and my goal of getting trim! In particular a date pudding which was served with caramel sauce, salted caramel ice cream with crunchy bits was to die for.

Talking about food, Melbourne wouldn’t be Melbourne without a stroll down the chic and funky lane ways for a bite to eat. I was fortunate to have some chillax time with most often attendees at a bustling cafe and I had the most scrumptious taco’s ever! It’s easy to get cabin fever when it’s too easy to never get your head outside a hotel for three days. I’m thankful for the Melbournians in the group for showing us a brief glimpse of this bustling metropolitan city!

But it’s not about the food it’s about the people, the content and the ability to give people key concepts, key ideas that people can take away and work on their business and get dal results. I know that the majority of people who came were inspired to take action, they were assigned accountability partners and they had action plans and goals.

Here’s some feedback that some of the attendees wrote in the MOBE groups: 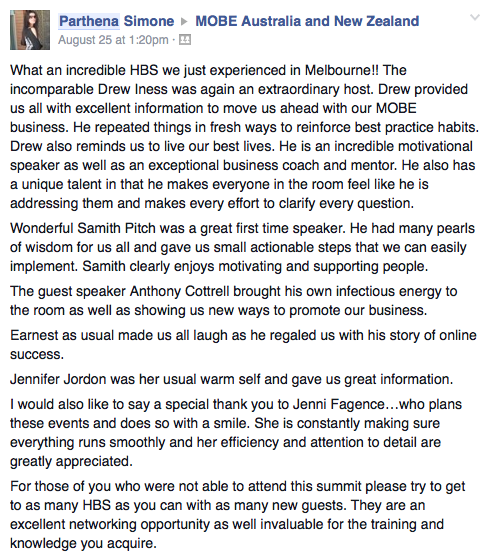 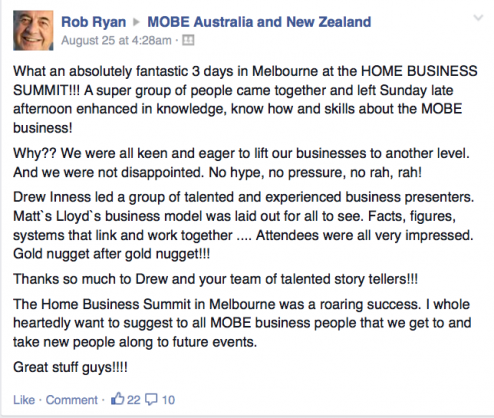 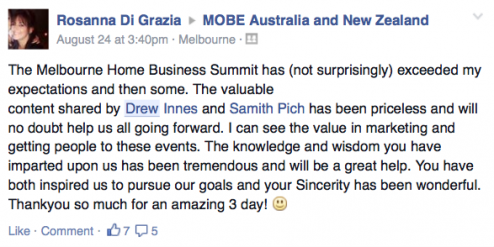 Whilst there wasn’t a huge turn out I truly believe it was worth turning out. And I am looking forward to going to the next one and speaking some more.

Before I go off I just want to give a huge thanks to Drew Innes for being the rock of the Home Business Summit Melbourne, he was a presentation machine and despite what he says ‘He’s a true professional’. If you’d like to visit Drew’s blog you can do so here.

Also I’d like to give thanks to our event co-ordinator Jenni Fagence for co-ordinating the wonderful event. And Sarah Cross for her volunteer efforts!

And oh if it wasn’t abundant clear by the feedback if there’s one thing you want to do to grow your business it’s this: GET – TO – EVENTS!

Talking about amazing events. Now I have to get ready for the the Titanium Mastermind in the Bahamas…

Jeez this internet marketing life is hard – but someone has to do it! Perhaps you can join us too!

To join MOBE and My Top Tier Business join here.