The Project 3 Speech – Get To The Point had to address the following criteria:

Well I’m proud to say that I used no notes!

Personally, I thought it was impossible to do (should’ve been on my impossible list).

Luckily I sought out a mentor who could help me with this sticking point in the previous meeting. Her name was Madeline and she was a professional speaker and trainer. She had given a fantastic educational speech on how to develop a speech outline (without using notes) and I was inspired by her professionalism.

So I spent almost a whole morning being mentored to create a speech from scratch, to distill it to its main points and to reign in my imagination (very hard to do!). Finally i thought I had a good speech outline, when no sooner said than done Madeline ordered me to go to the lectern and speak form the heart and without notes.

Needless to say the results were dreadful.

But, I got better with practice.
Slowly.
During and after the speech I saw Madeline’s beaming happy face. She was very proud of her student. And I was honoured that she was my teacher.

So without further ado…
You can listen to the speech and follow along with me below. 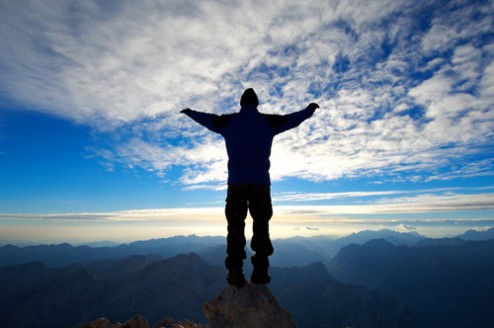 Greatness is within ALL of us. Everyone here tonight has the potential and capacity to be absolutely great at something.

In fact, I’m going to take it one step further. I’m going to argue that you’re doing yourself, your families, and indeed the world a huge disservice by not being as great as you could possibly be.

Imagine, if you were Clark Kent. And you went to work everyday, did your job, talked to your colleagues and went home never showing that beneath your shirt was the beating heart of Superman!

Imagine, if you were Wonder Woman. And you were gifted the gift of the golden magical lasso. And instead of using it to reign in villains you instead used it to walk Fido the dog.

Tonight, I want to persuade you to become open to the possibility that you indeed have greatness inside you. I’m going to share with you my own journey into finding my own greatness and give you some actionable steps to take home tonight to begin your own journey.

So listen up everyone! Because tonight could be THE night that everything changes for you!

It’s In Your hands.

With any discussion of greatness we must of course ask how we can define greatness and where does greatness start?

I spent a long time trying to find a suitable definition of greatness until I realised something – how WE define greatness defines US.

However, I believe that we all intuitively know when we see or hear about greatness. And the way we usually hear or see it is via a great story.

Usually it involves someone with a burning desire to reach an impossible goal, and along the way they become besotted with all manner of trials and obstacles, tribulations that would cause ordinary people to give up in despaired until finally, finally they reach their goal, and they attain greatness.

I think the greatest story that defines greatness for us is, the story we tell ourselves.

Unfortunately, when it comes to stories mine is not all that flash.

In fact, I spent many years shying away form my story, and in fact was down right embarrassed. I was the son of refugee parents scarred from a civil war and we most of our childhood not being able to afford many of the things that my friends took for granted. To not become a target of continual bullying I kept my head down, and away from the limelight.

And it stayed that way until one day I found out I was three things:

I spent a long time in a dark place, blaming the world for my place in out and not taking as much responsibility for my roles as I should.

I asked myself, just because I had been this way for so long, did that mean I had to stay that way for the next 30 years? The answer was no.

I realized that in order for anything in my life to change, I had to change.

And so I began the slow arduous journey out of the darkness.

So here are some steps that I took to begin the journey to finding my own greatness.

I started pouring myself in Personal Development like it was going out of fashion! I’ve read more books in the past three years than I read in the past thirty. I’ve attended so many courses and seminars, and at every opportunity I’ve tried to find mentors who were successful in the areas I wanted to excel in.

And through it all I started seeing a familiar theme starting to arise.

The theme was No LIMITS. There are NO limits to how great you can possibly be. In fact the only limits there are the limits you place on yourself.

I smile at that because I remember placing so many limits on myself!

In closing I want to affirm for you, that’s it’s possible, that you have greatness lying dormant inside of you just waiting to be unleashed.

I want to persuade you to continue your own Personal Development story of which Toast masters is a great resource.

I’m asking you to realise that you are the authors of the your own stories. And if you are going to write your own story, why not write a great one??

As I said in the beginning of this speech –

It’s in your hands.