On Monday 3 February I entered into the Toastmasters International Speech Competition at my local club Sandgropers Toastmasters in Duncraig. It was the first time I had entered the international speech competition, after being disqualified for going over time in my last Toastmasters Humourous competition around 6 months ago. I was hell sure that wasn’t going to happen again!

Most (winning) international speeches are usually a great combination of great oratory and floor craft skills, an uplifting inspiration message mixed with excellent story telling. And two weeks before the competition I felt I had a speech that could meet the criteria. Essentially a rework of a speech I had done earlier.

However a week before the competition, I really felt that that speech was not the one I really wanted to give on the day. Since the beginning of my Toastmasters journey I had the beginning of an idea for my Project 10 speech – the Inspirational. It was going to be about finding my father, or the journey to find the father in me.

Coming into the speech I was particularly nervous about how the speech would be received, as it was an (uncustomary) more sombre speech, and quite personal. I felt it was a good speech – but would it be a winning speech on the night? 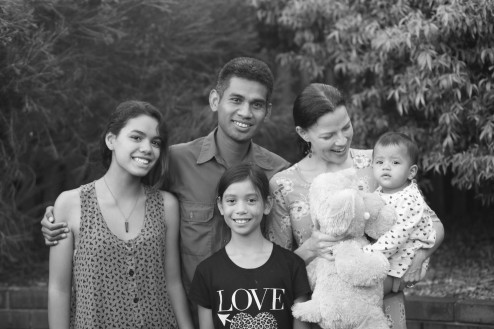 Meet my family, the reason I do what I do…

I’m a proud dad. I love everything about the role. From helping my daughters with their home work, to giving them advice to just spending time with them. I know how important the role of a positive father is.

Yet it I wasn’t until I was 31 years old when I finally met my own father. In January of 2011 my wife Iris, my mother and I travelled 5191 km to the heart of Cambodia, to the town of my birth to meet with the man who last saw me as child in the chaotic last days of a terrible civil war. And after 15 long years of dreaming of this day I finally met him… but he was dead.

How does a man find a father he’s already lost?

When I was 15 the dad who I grew up with, the man who I thought was my father, walked out on the family. I remember it was the first really chilly day of Autumn and the trees were become bare of leaves, the lawn was a carpet of brown and orange. In front of me I saw the silhoette of my dad through the fly screen door with two luggage bags by his side. He was giving my sister a good bye hug and kiss. Behind me I could hear my mother sobbing from a back room and she told me to go and help my father with his bags.

I remember the crunch of the autumn leaves beneath his foot steps as he walked out the gate.

Not not long after my mother revealed to me a shocking secret from the past.

The truth was: my dad was not my father, he was somone who promised my mother a better life. My biological father was still in Cambodia and with him was my brother a brother I never knew. During that civil war my mother had to make a heart breaking decision about which of her sons she could bring to Australia. Separated by fate and an ocean between us we were truely a tale of two cities.

Along the way I got married at the age of 19 and I found myself becoming a dad at 20. They say that you can never know the love of a parent until you become one.

Well I found this true with the births of my three daughters. I have never known a love like the love I have for my daughters. There’s Lili who’s 14 going on 20, Eve, who has a huge heart at 10 and the ridiculously adorable, Nalina who’s almost 2 years old. For me, becoming a dad was falling like in love at first sight, it just took 9 months to get acquainted, and from those days on wards I knew what I wanted to be, I wanted to be a great dad. However I really grappled with what it meant to become one. In many ways the things that I rejected in my own father came out anyway. And along the way, a lot of good too.

However between the responsibiltites of family and work and balancing budgets, the dream of finally meeting my father was like the shore of cambodia – always off in the distance.

When I was nearing 30 I decided it was time to make finding my father a reality. My brother and I were in communication, well as best as we could since he couldn’t speak a word of english and unfortunately my Khmer was pretty much useless after Hello, how are you. And I could count to 10 but thats only useful if you are 5 years old.

But, three weeks before we were to leave for Cambodia I get a phone call from my mum.

‘I’m sorry my son, your father died this morning’

For a few moments, I thought she was talking about the dad that left us.

When I found out it was my father in Cambodia I didn’t know whether to be relieved or not.

I would finally meet my father… at his funeral.

His funeral was a simple affair. Khmer music blared through the community as family and extended alike came to pay their respects. I remember kids running around bare foot in the dirt, their mouths stuffed with food from the food prep areas to keep them quiet. I saw the dusty robe of monks, chanting hypnotically and the over powering smell of incense and spices in the air.

I’m sorry. I can not wait any longer.

My quest to find my father was always a quest to find myself. To finally accept and love the man in the mirror, to be thankful for the influence of the man who raised me and to come to terms with the fact that I wasn’t meant to meet my biological father, and thats ok.

Because the truth is, the pages of this story are still being written, the threads of my history are still being braided into the fabric of my children. And that the day a man can live his own life, when he can move out of the shadow of his parents and into the light of his own, when he can stand in front of the world and say that nothing matters until you love, and that love is all that matters. Then you can truly say, you have found your father.

Personally I knew I had given a really good speech, it felt good to deliver it and there were no hiccups in it’s delivery. But that night there were 5 excellent and impressive speeches. During the break everyone congratulated me and told me they loved the speech, commenting that the calibre of speeches were extremely high.

In the end though my speech wasn’t good enough to win the competition, and I placed third.

In another twist, I delivered a rip roaring evaluation (since it was also the Local Toastmasters Evaulation Contest) on the same night and I had put my name down for both competitions.

During Bromyn Bishop’s excellent speech ‘Joy – The Elusive Pumpernickel’ I furiously used the back of my Speech program to write half a page of notes. We then were able to go into a waiting room and spend 5 minutes further to work on our speech.

Walking into the speech I had the only barest essentials of the speech. 1 main point each of the Commend – Recommend-Commend standard evaluation speech.

I knew it wasn’t going to come down to what I said. The only thing I really had to focus on was the line ‘You can’t spell Journey without J.O.Y!!’ Yeah, deep right?? LOL.

I knew it would come down to delivery, so I really ramped up my happy, bouncy and cheerful self, I got in some laughs and it seems to do the trick.

I placed First place in the Toastmasters Evaluation Contest and that means I will be up to represent the club in the area level.

On a final note, in regards to the speech contest I came to a realization.

All the speeches in the Toastmasters Manuals should be speeches you want to deliver, and straight from the heart even if it’s an overwhelmingly humorous one.

However, when it comes to a competition, where showmanship and floor work and speech craft come into play. I think you really need to play into a central tenant of speaking:

Know Your Audience. And give the speech they want to hear.