On Monday 11th June 2012 I ventured nervously into my first Sandgropers Toastmasters meeting.

Toastmasters is an international organisation that helps people develop effective communication and leadership skills. I really wanted to hone my speaking skills because I have a dream of speaking professionally one day so I wanted to do a ‘speaking course’ and when I found out that my nearest Toastmasters was only 10 minutes down the road I no longer had an excuse to hold my dream back.

So what have I been doing since June?

I’ve mainly been listening, creating frienships and partaking in the much loved (or dreaded) Table topics. Table Topics is an impromptu speech on a random topic which the speaker must speek for about 2 mins on. Basically you have to spin utter crap in an entertaining way for 2 mins (or is that just me??)

Fortunately, I seem to be pretty good at it as I’ve twice won the best Table Topics speaker award (the first being on my first tale topics speech!) and I recently came third place in a Table Topics district competition in which others described my speech as

‘the funniest/ clever attempt to stall and delaying the actual answering of the table topics I’ve seen.’

Honestly I was just buying time to adequately answer my table topic (and which I never actually did) and the crowd seemed to enjoy it.

According to www.sixminutes.com the Ice Breaker speech has three aims:

However, I kept stripping away (to get it under 5 minutes) until I believe I came up with a very succinct, easy to follow speech about the origins of my name and how my relationship with it has changed.

You can listen to the speech by pressing the PLAY button on the links below:

What’s In A Name?

My name is Samith Pich and for my ice breaker speech I want to ask you the question – Whats in a name?

When does a name become more than a name? Can our names ‘make’ us or do we make our names? In this speech I am going to discuss with you the origins of my name, how I struggled with it when I was younger and how I eventually accepted it as my friend.

Sad to say but When I was younger I thought my name was an annoying hindrance.

Now Samith according to my mum means ‘runner’ or the act of running.

At the time I was born Cambodia was in the middle of a terrible civil war and we were fleeing from a group of people called Khmer Rouge. As a refugee my name seemed pretty apt as we fled the terrible atrocities in Cambodia to flee hundreds of kilometres across the border to Thailand and then finally to Australia.

And Pich, well, There’s an interesting story behind my name and how I got it. Firstly I was born under a palm tree in the middle of the jungle.

Now by Australian standards this would be pretty strange but in 1979 in Cambodia it was much more common. My mother had fled her village to the safety of the jungle and Under a clear starry night after I was born, my mum saw a streak of mortar shells and flares in the distance and she thought to herself that despite the terrible situation she was in how pretty the scene seemed and how each of the bright lights seemed like diamonds in the sky. So she gave me the surname of Pich meaning diamonds or ‘something that could be a diamond or the potential to be thing bright’

So Samith Pich or SAhmet Pic as its said in khmer means ‘Running Bright Diamond like Potential thing’.

Not a bad meaning but I always felt it was slightly vague. How can a diamond run? O how I wished I had a more Aussie name like Barry! So when I was a small kid, new to Australia schools, dark skinned in a sea of pale faces, big ears, strange afro I began to intimately connect with my strange name as much as I began to connect to this strange country.

However not always in the positive. Because in the back of my mind, despite the bravery of my parents, despite my never ending gratitude for being fortunate enough to be in a country like Australia, I couldn’t help thinking to myself: ‘If I am a runner, what am I running away from? And if I am always running away from things does that make me a coward?’

For the longest while my name and the meaning I gave it, that I was a person who run away from things,  came to signify how I would approach my relationships, it coloured the way I viewed life, its challenges and it’s hardships. Pretty sad way to view yourself isn’t it?

Fortunately, it didn’t stay that way. 5 Years ago I began a journey of self discovery and self development which continues to this day in which I began to question everything I beleived and I had accepted as pretty self evident. Which lead to, amongst many other things, my name.

So oneday while having a lovely time visiting my mum I asked her again What does my name mean? She said’ Friendly Diamond’ I exclaimed ‘What!’ You told me Running Diamond Potential thing!’ In typical mum fashion she scolded me and said’ Well you obviously weren’t listening at the time!’ And while I protested I couldn’t deny that perhaps she was right. So I asked Please explain!

Samet’ she said does mean run like ‘run over there!’ But more commonly it what you would refer to as a good friend like how in Australia people call each other Mate.

Just like when you see a mate across the street and you run to each other and with joy greet each other as Samet!’ Oh I went… And then my mum said something that I would never forget. And anyways what matters is who someone is, not what they are called” And you are a good boy. O….

So the meaning I gave my name wasn’t the true meaning. my name was infinitely more positive. I wasn’t a person who ran away from things I was a person who could run towards things and people could run towards me!
I could start being exactly who I chose to be and from that day I started being a friend to myself. Nowadays I love the sound of my own name! I mean, what’s in a name anyways? That which we call a rose by any other name would smell just as sweet..
Post Note: I am very glad to say that I won ‘Best Speech’ on the night and that one guest described my speech as ‘the best Ice-breaker First speech that I have ever heard.’ 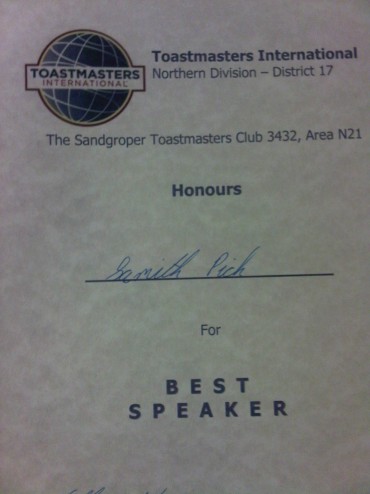