I’ve just returned from a a couple of days in Las Vegas attending Digital Altitude’s first Marketing Mastery event. Overall it was an exceptional event. 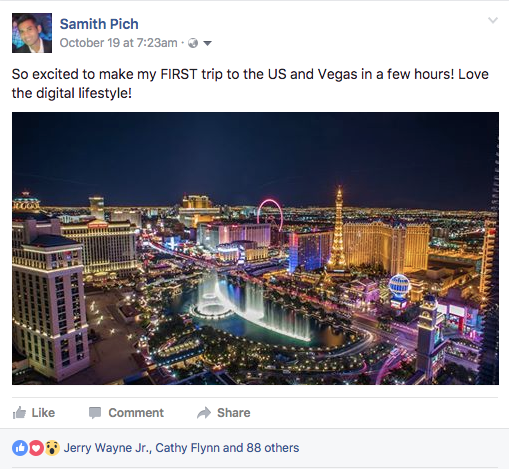 A couple of days before I left I posted a quick FB post that I was off to travel to Las Vegas for the first time and of all the people my Aunty Vanna saw the post and said we HAD TO meet!

Long story short: My Aunty Vanna was a long lost aunt. We haven’t met since the Cambodian civil war separated each other back in 1979 and I was a year old.

It’s a long heart wrenching story, but because of the freedom afforded via internet marketing, we finally got to close that chapter and finally connect.

Here’s a short video that was shared on FB and had a lot of traction on my wall.

So the highlight was finally meeting this very special lady, we had lunch and dinner, walked the Vegas strip and spoke until 3am in the morning two nights in a row!

Back to the event.

A confession of a traveller

Give me two things:

Seriously compared to what people had to endure a hundred years ago to travel we’re practically gods flying around in winged carriages rather than the weeks or month by land or sea you had to endure.

Travelling today is essentially witnessing the miracle that is flight. Louis CK said it best here:

I even see the process of security as a wonderful thing. Taking off my shoes and belt and dropping off my electronics is like shedding a second skin…

Living in Perth, WA means travel for me is never a short thing. Travelling to Vegas was 3 stops and 24 hours later.

But what is travel these days? 2-3 movies, a nap and 2 hot meals in relative comfort. Am I right??

I really like Americans. There I said it. I know its the in thing to bash america but say what you want but their people are cool.

My uber drivers were cool. The waiters were very attentive. The bag guys were ridiculously cheerful. And all the leaders in Digital Altitude stunningly down to earth.

Until they got on the stage. Then they rocked it!

Maybe its because Vegas is built on tourism but dammit – everyone was so damn nice. And everyone used manners.

They think I have a great accent. i like theirs. Its a win/win situation.

One thing I did notice though.

Thats not a car. Thats a tank!

Their cars. Daaaaamn. They’re big. Everything is a muscle bound, huge version of a big car here in Australia. The roads are big. The food is big. The building are YUGE. Everything is supersize. 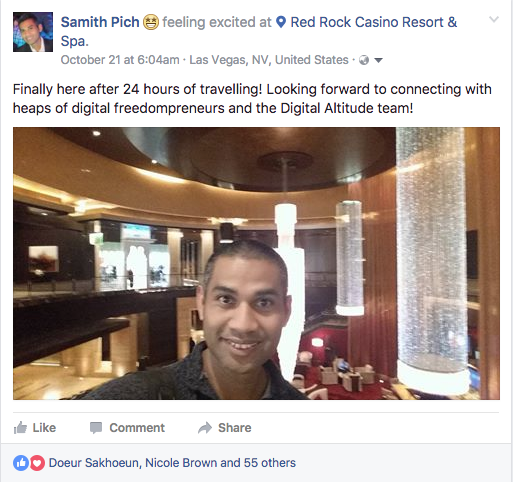 Yeah I learned the lingo.

The first question was – Why didn’t DA have an event on the Vegas strip?

Then when you get onto the strip you realise why. If the event was on the strip, people that ventured outside would never be found again.

Secluded in the foothills it blesses you with a beautifully inspiring view of the mountains. It’s an oasis in the desert and away from the hustle and bustle of town.

Everything looked, felt and tasted like Luxury. It’s colours were deep maroon red, gold accents and rich blacks with splashes of peal and stone white.

The signature suite that I stayed in was a marvel.

What that meant was it gave you more time to be immersed in the actually event and its training.

Every event is about the big things and the little things. On both accounts Digital Altitude excelled.

A huuuuge, huge thank you to Shannon Lavenia, John Lavenia and the support and event team of running a beautifully run ship. 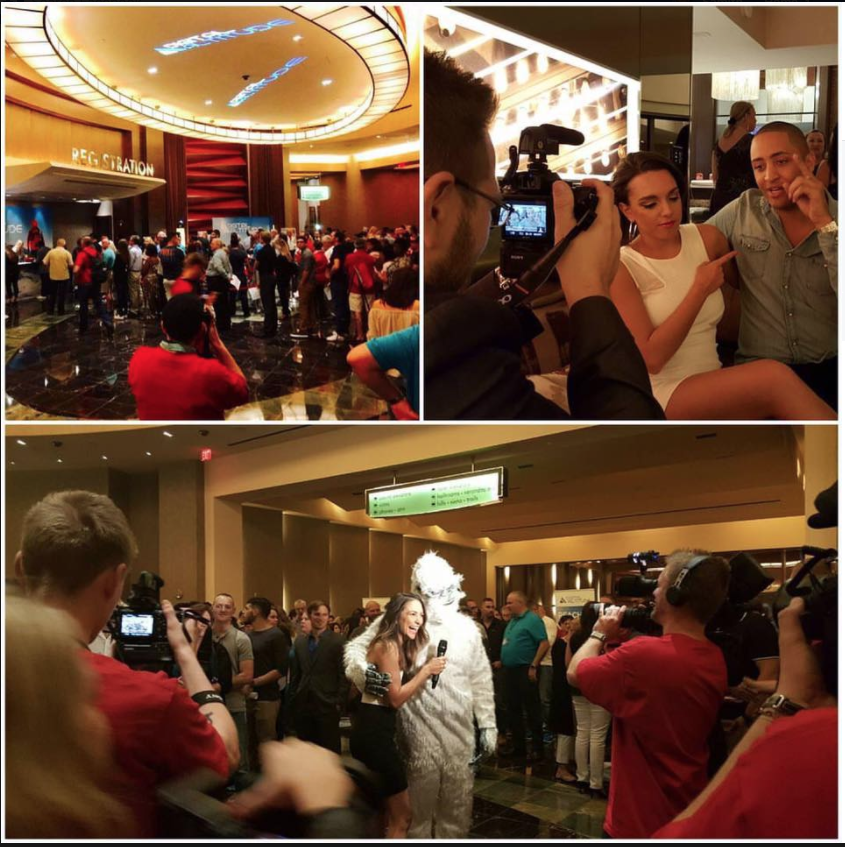 Michael knew how to treat the VIPS and top earners. This started on Thursday night with a leadership and top earners dinner at the the Stack. Followed by a show and night caps in the MGM.

There was a VIP & coaches meet and greet on the Friday afternoon by the pool. There was a Vip lunch on Saturday and the VIP drinks at the bowling alley complete with impersonators and card trick magician was a a hit!

1000+ packed the registration hall. It was controlled pandemonium! Red Rock is MADE for events. As you pass the gorgeous entrance, past the lobby, up the stairs you see a big REGISTRATION sign embalmed in gold. (In case the 1000+ people standing in line didn’t give you a hint)

People were taking pictures. I was hugging students and old friends left right and centre. A white Yeti with skiers were having a jolly good time. T-shirts were flung into the air. It wasn’t a registration it was party!

The ballroom was big yet intimate. Music pervaded your senses. The stage was a long run way with a long chrystal clear screen that anyone could see form any direction.

Michael was great. The speakers were awesome. Stories were shared. Marketing tactics flowed like wine. Q & A were given. Prizes dispensed. It was a tour-de-force.

It wasn’t a pitch fest. I hardly even noticed one. No one run to the back of the room. But people bought.

The marketing content was spot on. It was varied. It was actionable. It was centred around the beginner marketer. And if that was you – you were aptly served. 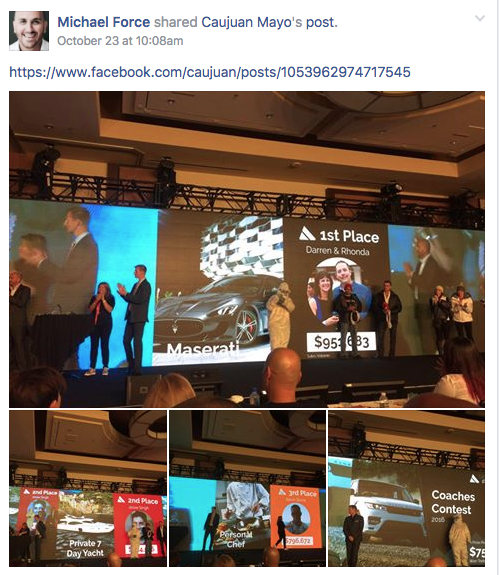 In the corner of the stage there was always a person doing sign language for the hearing impaired.

Around the corner of the ballroom was the VIP section freshly stacked with pastries and hot coffee and teas for last minute nibbles.

Every speaker gave out a printable action guide with checklists to take home and complete.

For those who missed the slides there was an app where you could download the handouts. Thank you!!

All the presentations keynotes had a clear and congruent style so you could focus on the message. (thanks again Shannon).

Speakers were in the crowd, were accessible and gave freely. VIP or not.

But it all wasn’t perfect.

The first 30 mins to an 1 hour of the event the AV didn’t work so we couldn’t see keynote slides. This should have been sorted and tested before the event.

If you’re an experienced marketer who knows what they’re doing then the content wasn’t anything you wouldn’t know. It was aimed squarely at the beginner. But while the content was consumer level the networking was priceless.

Not enough time in the pool.

There was a small glitch in the contest drawing for prizes. Next time!

Not everyone wanted to wear the coat and beanie in their prize winning photo (I’m talking to the pretty boy who was Jason Stone).

There was no Maserati on stage for the first prize winner to drive off on. Yes, unforgivable.

And finally, I have to say it, and I’m not happy to say it because I didn’t see myself as a snob in this area…

But the hotel coffee was terrible. The coffee in the starbucks was like liquid burnt ash.

I went to 5 places and their coffee was drinkable in a distasteful kind of way.

It wasn’t until I flew back into Sydney and ordered an airport cuppocino did my senses return and I had a hit of frothy coffee-gasm.

Get your act together America! 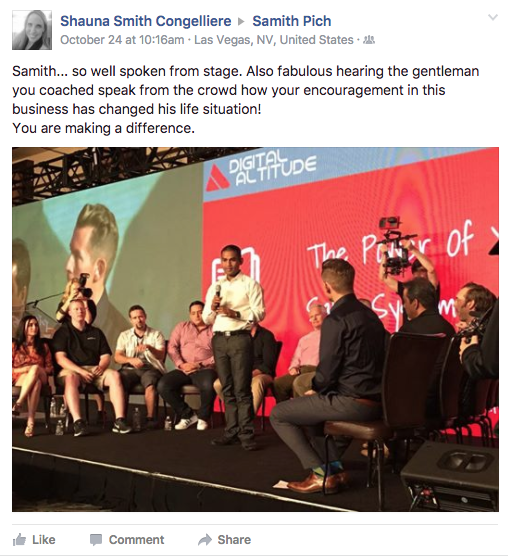 Congrats to Michael and the Digital Altitude team for hosting an amazing event. The location was great. The calibre of the event and the calibre of the speakers was exceptional. You really took care of EVERYONE.

Something very special was created. And it makes you hungry for more.

Being here at the beginning makes it all the more special.

I met long lost Aunties, reconnected with old friends, met new ones. Had great food and put on 2 kilos!

I can neither confirm nor deny I married someone named Sharron Stone in a drive by wedding.

It doesn’t get better than that… 😀

Learn more about how I make money online here.
Check out Red Rock Resort Here
Follow me on Facebook here.