11 Things I Learned From Winning An Edupreneur Award

11 Things I Learned From Winning An Edupreneur Award
If someone has any training on how to accept an award without feeling sheepish and walking up to the podium without flailing your arms I would have loved to have taken it.
Having said that I was excited to have received my second business award this year. 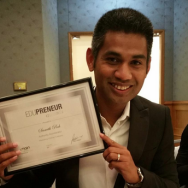 This time for Excellence in Edupreneurship in the Marketing (Online) category as a part of the Edupreneur Awards 2015.
It was a wonderful evening, held at the snazzy Duxton Hotel in Perth. It was a wonderful mix of glamour, networking and acknowledging.
Even though it was an awards night for Edupreneurs across Australia the true star was the divine Sarah Cordiner. She had single handedly become the thought leader in this niche of ‘Edupreneurship’ and took the concept of Edupreneur Awards from Concept to dazzling completion.
The other star was a brazillian dancer (or a dancer who danced Brazilian) more on that in a moment.
Here’s some of my biggest takeaways from winning an Edupreneur Award
1. The Power of Community
Entrepreneurs are a disparate bunch. And we wear the badge of ‘outsiders’ proudly by default. But it’s one thing to create a tribe. It’s another to create a community.
The difference is a tribe is collectively all very similar. A community can encompass many tribes.
People want to belong to a cause, they inherently want to do good. So if you give them an opportunity to not only glam up but also to see that they are a part of something bigger, almost a movement, then magic happens.
[tweetthis]”Every single day we are here not to only educate others but also to educate ourselves”[/tweetthis]
If you can take a disparate bunch like Entrepreneurs and collective huddle them into a community of Edupreneurs you have a powerful platform and you have a powerful force for good.
2. Acknowledgement is Good Business
When I was in high school I decided to teach myself the art of flattery and paying compliments to girls. Just to see their reaction.
Unfortunately I hadn’t yet mastered tone yet. So it often came out as sarcasm. Or a cry for help.
And it safer on you if they don’t have boyfriends…
But tonight I learnt that there’s a level above compliments and thats acknowledgement.
You see when you give a compliment (even when it’s genuine) it’s quite a subjective acknowledgment. And its a personal one.
But if you were in a group and you told the group ‘Hey Ming, is the best facebook Marketer in Perth and she gets real results for her clients’. It’s hard to defend because a) it’s factual and b) you’re not actually address her, you’re telling everyone.
One of the most powerful forces is the acknowledgement of others – it compels us to prove them right…
And here’s something sneaky and cool – by acknowledging others for excellence you become acknowledged for excellence by default.
It was a no brainer that one of two standing ovations of the night came when Sarah made her address. 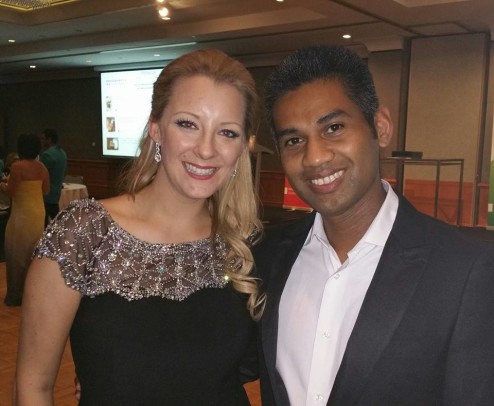 If you’re not familiar with Periscope thats ok, until last night I heard of it but never actually used it.
Periscope is an app on your phone that allows you to broadcast live video and it connects with Twitter.
So people are seeing what you see LIVE.
You pretty much create an event on Periscope – I started one for Edupreneur Awards 2015. And then Doyle Bueller took it and made it infinity better (as he does).
Doyle also was perhaps the first ever Contest Judge to be broadcasting an awards night on Periscope.
Beat that Grammys!
Now because it’s live people can actually write comments on your event wall and you can answer them live and when you say god stuff you can tap the screen and hearts float up on the screen. Like a warm fuzzy hearted choo-choo train.
I hammered the heart button so many times. But my bromance with Doyle seems unrequited.
Or perhaps it was because he was on ‘official Judge business.’
4. Live Twitterwalls are addictive and hilarious – hashtags #crazyfaces
Ok I have a confession. I’m an internet marketing expert and I never ‘got Twitter’ [Ed – What is it you actually DO know about internet marketing??]
Until tonight.
Firstly, on the walls were two large screencasts of a Tweet Wall.
We were encouraged to tweet about the event using the hashtag #eduawards15 There was also a leaderboard of people who gave out the most tweets using that hashtag.
Well thats all it took for me to dive in whole heartedly.
The Tweet Wall was streaming live tweets of the event with cool images.
Some tweets were inspiring, some were enthusiastic but as the night wore on, and the drinks flowed the tweets got funnier and crazier.
At one point someone asked where the toilet was. At another someone was trying to sell their Prado.
And as I got into the two and throw of tweeting, retweeting, repplying and favoring starring comments – I got what Twitter was all about.
Twitter is NOT FB. Essentially Twitter is a party.
Imagine a party where there’s heaps of conversations going on.
There’s a dancer in the middle who’s out twerking the Mardi Gras in Rio.
The music is loud and thumping. There’s plenty of booze and everyone is enveloped in the warm glow of selfies and laughter.
You can’t have a long meaningful conversation – you can barely hear it each above the noise!
So you have to have short sharp conversations, punctuated by exclamation marks and you point at things around the room to get your point across.
And if you like sardonic wit Twitter is the place to be.
Anyways Twitterwalls are addictive. And thanks to Sam Cawthorn crazy faces are just as much so.
I got to have crazy selfies with speaking mentor Sam Cawthorn!!
5. Quotes and Crazy faces gets retweeted
Enough said here. Look at what Sam created… 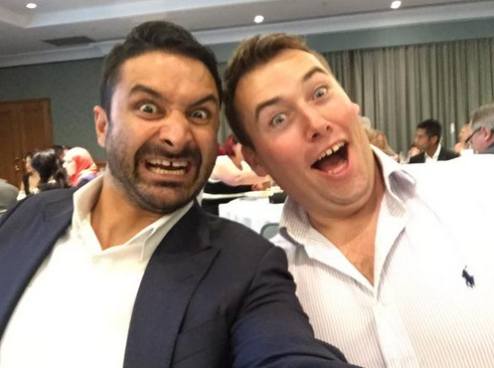 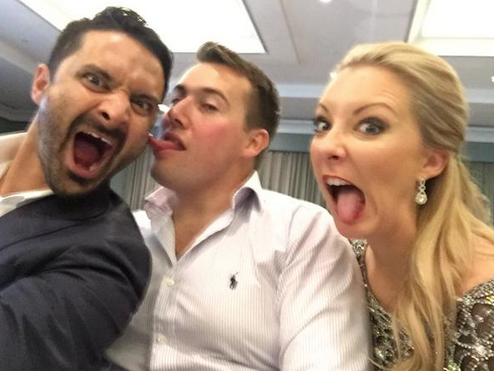 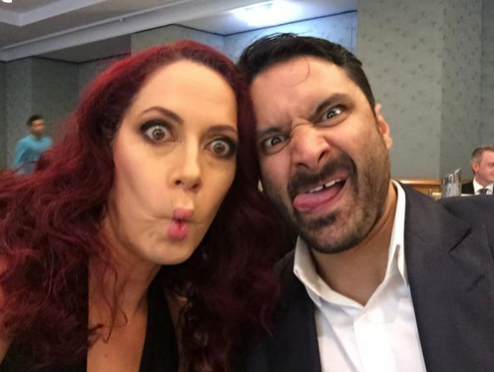 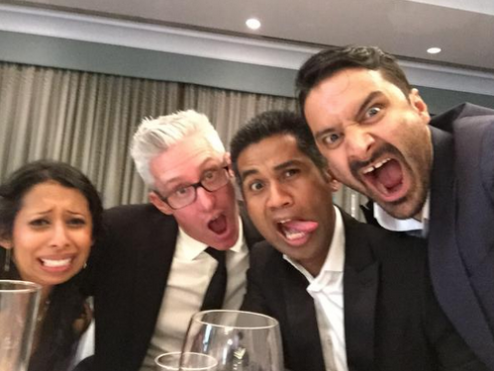 6. The Art of Conversation.
Award ceremonies are very much like going to your daughters dance recital. To be honest you’re only there because you want to see her on stage. The rest of the kids, well they’re… OK. Except Billy, he’s the bratty kid and you’re happy he’s playing a tree.
If they could just make the whole night about her 15 seconds of fame, delete the rest and have more free food it would be as close to perfect as you can get.
Unfortunately thats not how real life works.
So it gives adults a chance to practice their conversation skills. Or update their twitter feed so they can go up the Twitter Wall rankings.
(Or gawk at the amazing brazillian dancer who twerked up a storm…)
I haven’t worked out what to say after “Can I have your business card”
Queue awkward silence until dessert arrives.
7. Know Your Message
You don’t have to be good looking (it helps though). You don’t have to be a good speaker (it helps).
But you do have to KNOW your message. And if its a good message it cuts through the fluff. 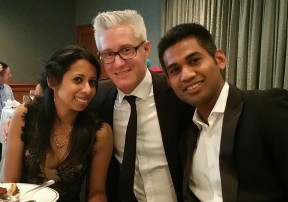 I had a great chat with two entrepreneurs on both sides of me. One was Simla Sooboodoo of Hands On Journeys and in a few words they had me hooked on their message, on their mission and purpose.
They also confided about having no idea about social media and internet marketing.
And I said, ‘Your message is more important than your method. And you have an amazing message.’
And I gave them my card. 😉
When a message connects straight with your heart. You know its a good message.
[tweetthis]”He who teaches their markets becomes the authority” #eduawards15[/tweetthis]
8. Get an excellent MC
We had an excellent MC – if you’re hosting the awards you can’t be the MC.
9. It’s about being nominating (and winning)
As sheepish as you can feel walking up.
As awkward as it is to pose with someone as glam as Sarah Cornier.
The whole point is thats its awesome to just be nominated.
(And even more awesome to win).
Why?
Because it’s creating great marketing.
It’s about validating the large sums of money your clients and students have paid you.
Its about considering a price rise.
It’s about knowing you’re on purpose, on track and it’s not going unnoticed.
Actually it’s about great marketing.
10. It’s about networking
Confession: I hate business cards.
But I love hand shakes.
And I’m not a fan of hard liquor.
But I love a crispy samosa with some yoghurt sauce.
You’re customers give you a living. Your network gives you a life.
So while I hate business cards I do it so I can shake hands and eat samosas.
Note to self: 1. Go to taste.com to get the recipe. 2. Followup with the people who gave me a business card.
This blog post is a better business card.
11. A good tux is (almost) better than a good dress
I often open the door to my daughter when she comes home from school.
One time she came home and I opened the door in only my red underwear. (It was a hot summers day alright!)
Unfortunately this time she had brought some school friends home.
They thought it was hilarious.
She didn’t.
She didn’t talk to me for a week.
I smoothed it over with a McFlurry.
My point is impressions matter!
And there’s something about a nice suit or a tux that makes others look at you differently.
It makes women look at you twice (when they often don’t even look at you once).
It’s like a cool piece of armor made out of wool and satin.
So if you’re a guy wearing a suit is the closest you’ll ever be to being sexy.
Unlike women who are inherently sexy and then they have ruin it by wearing amazing clothes.
You only have one chance to make a good first impression.
Yesterday I finished putting on my Nikes to go out for my daily run.
I had to stop at the door when I realised I had no pants on.
12. Thank you
There was no award speeches tonight apart from Sam Cawthorn who deservedly won the Edupreneur of The Year Award and he gave a powerful speech.
But here’s mine written on a scrunched up tissue paper:

I just want to give my sincere thanks to everyone that voted for me, my wonderful clients and friends.
You’re reason I do what I do. Thank you.
I want to thank Sarah Cordiner for creating this opportunity for Edupreneurs everywhere to glam up and get acknowledged for the important work they do.
But most of all I want to thank my amazing wife who’s stood by me through a lot of thick and thin. In the beginning it was mainly thin.
You mean the world of me and you help me want to become a better man.
Love you heaps and heaps.